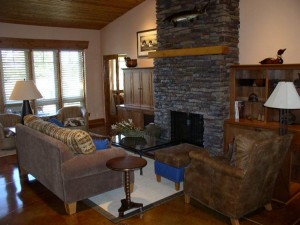 I’d spent the last 18 years as the Building Official

for a small Oregon Coast community and also had an additional 20 years as a general contractor.  Our plan was to have a single level house that quietly blended into the landscape, was built to provide protection from fire, had good energy conservation, and would last for many years with little or no maintenance. I had the knowledge of the newest materials and techniques needed to make this happen.  What I didn’t have was the time this project would take to do it myself.   I also didn’t know any of the sub-contractors or people in the trades over here that would be needed to put this home together so it was apparent that the best choice was to find a contractor. What would be needed was somebody both willing and capable to work with the non-traditional materials which were incorporated into the design. They also would need to be able to accept a huge amount of input from me as not just the owner; but also as a designer, builder, and code professional.

Tom Pryor of Cascade Property Development ended up in that position as the builder for the Building Official. I’m sure that it was not always an easy task but it was always one that he took on with a high degree of professionalism. For those parts of the construction he was not totally familiar with, he went out and found those sub-contractors that were. They were some of the best in their trades and always brought about the desired fit and finish.

At completion we had spent almost a year in construction and at Tom’s suggestion our home was entered and included on the Central Oregon Builders Association’s 2007 Tour of Homes. Because I had designed the house, I too was at the house during the tour. After visiting and talking to people I knew we had made a good choice in hiring Tom as our contractor. It turned out that the home, it’s setting, and quality of finish were all things that not just Judy and I appreciated but were also recognized by over 400 visitors that had gone through the house.